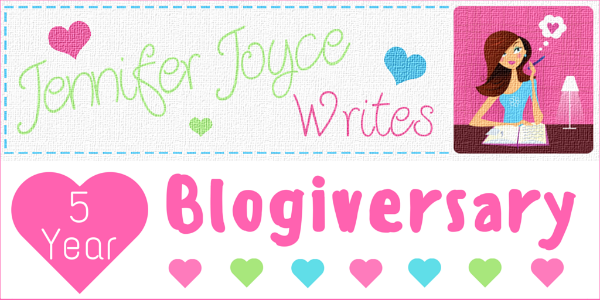 Five years ago today, I set up this blog (then named mamajheartschicklit). It was completely anonymous and I didn't tell anyone 'in real life' about the blog (not even my husband for a while) as I didn't really talk about my writing back then. I thought it was a silly dream that wouldn't actually come true so I mostly kept it to myself.

You can see in my very first post that everyone has code names - Mama J (me, which stands for Mama Jellyfish, which Rianne used to call me when she was little), The Partner (Chris, who is now The Husband), The Jellyfish (Rianne. I used to call her Jellyfish when she was little. She's 13 now and I don't think the nickname will fly anymore) and Boo (Isobel, who is still called Boo at home).

A lot has happened since that first post five years ago. I'm no longer anonymous for a start and unfortunately we no longer have our bunny, Oli. We don't have the stick insects either but I'm not quite so sad about that.

We now have two bunnies called Cinnamon and Leah and a Jack Russell called Luna (who likes to chase the bunnies around the garden. They aren't so keen about this).

So what else has happened over the past five years?

I got married, we've been on holiday to New York, Mallorca, Florida and Bulgaria and I discovered the wonderful world of social media where I get to share my love of books with other bookworms and authors.

But one of the most surprising things that has happened since starting the blog is I became a published author! I first self-published, releasing A Beginner's Guide To Christmas, A Beginner's Guide To Salad and Everything Changes But You before I was offered a book deal with CarinaUK (HarperCollins), who published my latest books, The Mince Pie Mix-Up and The Wedding Date.

So a lot has happened over the past five years and I'm looking forward to seeing what the next five will bring!

Come back to the blog this afternoon as I'll be running a giveaway to celebrate my five years of blogging.
﻿