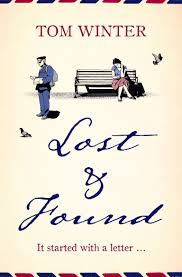 Carol has been trapped in an unhappy marriage for years. Bob is a good man but Carol simply doesn't love him and has only really stayed with him for so many years because of their daughter. But Sophie is seventeen now and Carol thinks the time is right to finally leave Bob. Just as she's about to announce her intentions, Bob receives some devastating news and Carol finds herself tethered to her husband once again. Frustrated, Carol begins to write anonymous letters, pouring out her feelings to the universe.
Albert is hurtling towards retirement. After so many years dedicated to the Post Office, it seems he is no longer needed. As his leaving date looms, Albert is given the task of sorting through the sacks of undeliverable mail. While he is sifting through the piles of mail, he is drawn to an envelope without an address and a smiley face in place of a stamp. He opens the letter, not knowing that doing so will change his life.
Lost & Found is told in an amusing way, though the lives of Albert and Carol are far from cheerful. Both are lonely and struggling. Carol has never really loved Bob, only marrying him because she was pregnant, and has never been able to escape. She doesn't have a great relationship with her mother and an even worse one with her daughter so the only person she has to confide in is her oldest friend, Helen. Carol scoffs at the idea of writing to the universe when Helen first suggests it but, in sheer desperation, she gives it a go.
Widower Albert lives alone with only his ageing cat, Gloria for company. I felt for Albert as he was pushed out at work, taking away the job he'd taken pride in but was now deemed too old to carry out. Being at work is the only social interaction Albert seems to have, apart from with his vile neighbour, Max who seems to prefer taunts and insults to conversation. Albert is clearly a lonely, isolated man so when he discovers Carol's letters he clings to them and the prospect of friendship.
Lost & Found is full of colourful characters, from the horrible Max, Albert's straight-talking colleague, Mickey and Carol's neighbour, Mandy. The book, despite tackling some difficult topics, is told in an amusing, often laugh out loud way but if you're looking for a light, joyful read this probably isn't for you. Albert and Carol lead completely different lives but both ache with loneliness and loss and an inability to change what life has thrown at them.
Thank you to Constable & Robinson for sending me a copy to review﻿