The Mummyfesto by Linda Green 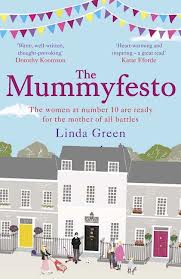 When the lollipop lady outside the school Sam's young sons attend is told she is about to lose her job due to government cuts, Sam feels she must do something. The lollipop lady is important, keeping the local children safe as they walk to and from school. So Sam joins forces with with Jackie and Anna, fellow parents at the school and together they fight the governments decision.
Upon their success, Sam is asked whether she would like to form her own political party. Sam has never been particularly politically-minded before but she's fed up with how the country is being run and decides to form a new family-friendly party. With friends Jackie and Anna on board, they devise a manifesto - or rather a mummyfesto - stating their core values and the things they want to change, and throw themselves into the next general election.
When I first received The Mummyfesto I was worried it would be too politically heavy for my liking but I found the underlying story was about the three women and their family issues. Sam has two young sons, one of which has an incurable disease which has left him wheelchair bound and reliant on machines to keep him healthy. Sam works at a children's hospice and when she finds out their government funding is about to be significantly reduced, she's even more determined that things must change to support the nation's families.
Jackie has family troubles of her own. Not only does she have a six year old daughter to take care of, her mother is suffering from Alzheimer's and is needing more and more care. Anna's teenage children are causing her concern; her 15 year old son is hanging out with the wrong crowd while her 13 year old daughter is being bullied, something her school refuses to tackle.
Despite their family commitments, the three women forge ahead with their plans, determined to change the way the country is run, not only to benefit their own families but those of the whole country. The women aren't always supported in their plans but they are strong and courageous enough to put themselves into the political world and challenge what they deem to be major flaws. Each woman is different, bringing something unique to the party. I liked that they were parents and friends above all else and that they supported each other through their troubles.
The children in The Mummyfesto are extremely important in the book as they bring humour and warmth and are also a major drive for Sam, Jackie and Anna to form the party. The children aren't just in the background - children and family are at the core of the new political party and they're at the core of The Mummyfesto too.
Thank you to Quercus for sending me a copy to review.﻿