A Family Scandal by Zoe Miller 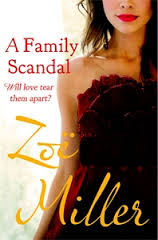 Vivienne has three beautiful daughters; Ellie, Miranda and Lucy. Ellie is a successful fashion designer and part of a celebrity couple. Ellie and Johnny have been together for two years and have been having a great time but Johnny has suddenly turned serious, talking about marriage and starting a family. Ellie has been stalling, not feeling the same need to commit, but she doesn't know how long she can keep putting him off.
Miranda has always lived in the shadows of her sisters so she's decided to start a new life for herself. Moving away to Hong Kong, Miranda feels she can finally be herself but it isn't long before her family's drama makes its way to her.
And then there is model Lucy who is trying to make a name for herself. Unfortunately, the name she is making for herself isn't a positive one as she's snapped making a fool of herself while drunk. Then when the anniversary of her father's death approaches, Lucy's media exposure increases and a wreath is eerily placed on her doorstep.
Twenty two years ago, Vivienne had a fling with up and coming rock star Zach Anderson, resulting in the birth of Lucy. Zach had moved away to Canada by the time Lucy was born and, a year later, plunged to his death in an icy lake. It was never confirmed whether Zach's death was an accident or intentional. Or whether somebody else was involved. But there is somebody out there who is determined to dredge up the past to find the answer.
The blurb of A Family Scandal really caught my attention and I couldn't wait to get stuck into it and get to the bottom of the Zach Anderson mystery. So I couldn't help feeling disappointed when I found the plot to be slow and focused more on a rupture between Ellie and Lucy's relationship. There was the odd paragraph or two from the anonymous investigator's point of view but other than that, the whole Zach Anderson affair was pretty much forgotten until the end.
To me, there seemed to to be three separate stories; Ellie and Lucy's fallout, Miranda's new life in Hong Kong and the mystery of what really happened to Zach Anderson. The stories are connected by the family members but the link between them felt weak and the anticipated mystery felt flat in the end.﻿