The Apartment In Rome Blog Tour 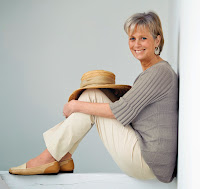 I'm pleased to welcome Penny Feeny onto the blog today as part of her blog tour. Penny is the author of The Apartment in Rome and will be sharing an extract from the book with us today:

Gina’s apartment building stood at the end of a narrow street in Trastevere. At ground level there’d once been a little hive of craftsmen’s workshops; there now remained only the joiner with his random pile of chair limbs, and the upholsterer. Further along, the lavanderia and alimentari were long established but the optician with his expensive prescription sunglasses had replaced the cobbler and the bijou toyshop was changing hands for the third time. Her building was shabby: patches of plaster flaked over the lintels and paint peeled from the wooden shutters. A stone staircase twisted up to the top floor, but it was worth the climb to reach her rooftop terrace.

This was the reason she would never move. Four storeys into the sky, with the sun baking the tiles and a view that had scarcely changed in centuries, she could imagine her world was perfect – if not quite as perfect as other people’s. Her neighbours across the way, media folk who considered themselves the new bohemians, had modern Perspex furniture the brilliant colours of boiled sweets, almost good enough to eat. They lounged in their jelly cubes waving matching cocktails and playing loud disco music. ‘Ciao, Gina!’ they’d call and she’d wave back, not letting them see for a second any glint of envy. Her outdoor chairs were old-fashioned, flaking wrought iron. They’d belonged to Felix, whose taste differed from hers, and she hadn’t got around to replacing them.

As she reached the top landing she became aware of a disturbance, of things not as they should be. Her key spun in the lock as if it had been recently oiled, and a rich cloying scent seeped under the door. When she nudged it open, she found herself facing a showy display of lilies on the hall console. In the living room bouquets of irises, roses and carnations covered every surface: the cumbersome walnut chiffonier that was too heavy to move, the low coffee table, the two chests crammed with clothes that were waiting to become vintage (although vintage was not much sought after in Italy).

It was a long time since she’d been besieged by so many flowers. The gesture seemed suspiciously flamboyant. The apartment was gloomy after the dazzling sunshine but she knew the hazards: the trailing flex of the TV, the soft, worn rugs that had slipped their moorings. She tiptoed over them all until she reached the bedroom and gave the door a dramatic shove.

Gina’s bedroom was not a sight for the faint-hearted. If you live alone there is no one to complain about the soiled laundry lying in exactly the same position for three days, the smeared make-up remover pads or the sticky Marsala glass attracting flies. Her dressing table was overcrowded and items of clothing swayed from the pediment of her wardrobe as if she lived in one large changing cubicle. She’d left the shutters closed so that light entered the room in a series of horizontal bands, slicing up its contents. She noticed immediately, however, the pale grey suit, a fine wool and mohair mix, hanging from a knob on her chest of drawers, and the pair of black shiny shoes lined up beneath it. In the middle of her double bed, his head and naked torso dark against her white pillows, the rest of his body beneath the duvet, lay Roberto. His teeth gleamed as he patted the embroidered cotton covers. ‘Surprised?’ he said. 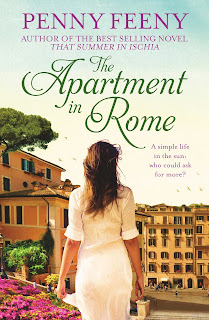 The Apartment In Rome is available now.﻿
Posted by Jennifer Joyce at 08:00