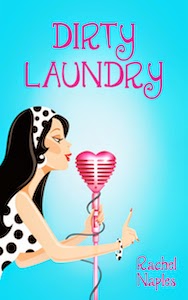 Getting divorced was the inspiration behind my book ‘Dirty Laundry.’ I was married to ‘the man of my dreams.’ Now, that phrase makes me cringe! Clearly, I would not make a good a romance novelist!

My divorce was nasty and worse, it felt like the whole world was watching. Okay, so I sometimes have a flair for the dramatic. The whole world wasn’t watching, but hey, it felt that way as our dirty laundry got hung out to dry. It left me feeling betrayed and angry and when the dust began to settle, I wondered how I could create something of value out of something that had been so painful.

But it wasn’t just my divorce that led me to writing my book; it was looking back a decade or so later that made me realize how lucky I was NOT to be married to him anymore. I felt so much gratitude that I literally got on my knees and thanked the Universe. From where I stood, that was a story that needed to be told because I know a lot of women (and men) who are still upset, feeling like they got the short end of the stick in their divorces. Here’s the kicker; my ex husband gave me more by leaving than he ever did by staying.

I’m a comedy writer but my secret weapon is transformation; and at the end of the day, that’s what matters to me. I believe we learn best when we don’t know we’re learning (thank you Tony Robbins) and story is a powerful way to do that. So what if I could help someone suddenly feel grateful instead of pissed off? Like, Oh God, I’m getting divorced, but thank God I don’t have to tolerate his emotional unavailability anymore. Now that’s something to think about, yes? And definitely something to be grateful for!

I’d just finished a chick flick for Paramount called ‘Shopping for Boys.’ We had our director and actresses in place. We were ready to go, when it all fell apart. To say it was soul crushing could not begin to describe how I felt. When I picked up myself off the floor (yes, I was really on the floor and not on my knees thanking the Universe), I decided I’d take matters into my own hands and write a book; and the best part? Nobody could tell me I couldn’t. And ’Dirty Laundry’ was born.


Dirty Laundry is available from Amazon now
You can find Rachel on Twitter @RachelNaples1 or email dirtylaundrybook@gmail.com
If you would like to appear here on the blog via a guest post, email me at jenniferjoycewrites@gmail.com
More details here
Posted by Jennifer Joyce at 08:00