Today I'm pleased to be taking part in the blog tour for Julia Williams' Coming Home For Christmas with a review of the book. 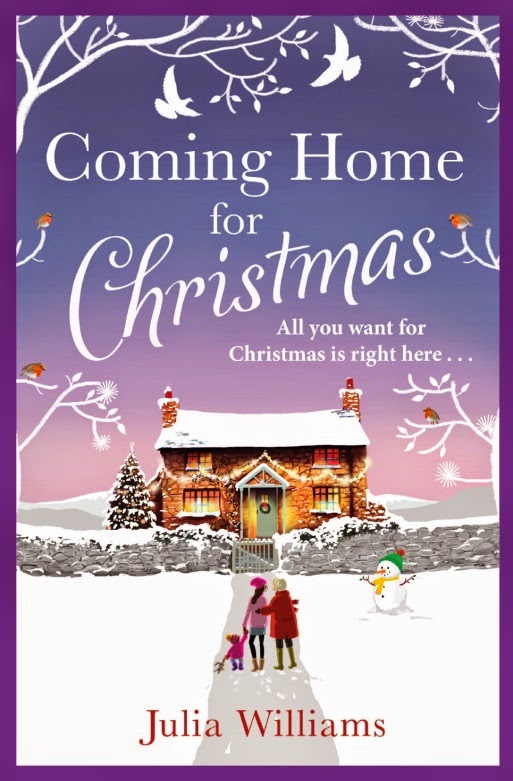 TV chef Cat is starting to feel like she is being put on the scrap heap of the television world as she edges deeper into her forties. She's hoping to host a new festive-themed show and is busy working on recipes while trying to juggle her busy family life.
Marianne is the mother of boisterous three-year-old twins and her life begins to feel even more hectic with the arrival of her husband's ex-wife and the ailing health of her father.
Pippa knows that after a year of separation, her marriage to Dan is over and she is trying to move on with new boyfriend, Richard. But she is devastated when Dan asks for a divorce.
Cat, Marianne and Pippa all have their own troubles but when they learn of plans to develop nearby land into a hotel and spa, they decide they cannot allow their close-knot village of Hope Christmas be destroyed. Gathering those opposed to the plans, they plot to halt the development and save their village.
Coming Home For Christmas is a story of relationships and friendships. All three women have their own problems going on at home but they all band together to try to stop the destruction of their beloved village. I really felt for Pippa as she tried to come to terms with the breakdown of her marriage to Dan. She still loves him and suspects she always will so it was sad to see her forced to live apart from him. They have children and still run her family farm together so she is still in regular contact with him. Through Dan, we learn that he still loves her too, which makes the whole situation even more heart breaking.
I also felt for Cat as she struggles with the aging process. Although she is still only in her mid forties, she feels like she has become invisible as she is cast aside for younger, more glamorous TV chefs. She also has quite a lot going on at home, with a house full of teenagers and pre-teens as well as a baby granddaughter who she and her husband have had to take quite an active role in the upbringing of. But the person I felt the most for was Marianne when her husband's ex, Eve arrives and starts to put a strain on her marriage to Gabriel. There were times when I wanted to give Marianne a good shake and tell her to stand up for herself more, to make Gabriel see what he was going to do to their marriage if he didn't start putting Marianne first.
As I was reading Coming Home For Christmas, I got the feeling it was a sequel as past events were mentioned and after looking it up I've discovered that the book revisits some previous characters of Julia Williams. Although I haven't read the other books, I didn't feel like I was missing out as all the relevant information was explained. I didn't think the book was overly festive but I did enjoy reading about Cat, Marianne and Pippa and their battle to save Hope Christmas. I liked the strong friendship between the three women as they support each other during some tough times and the ending gave me the warm, happy feeling I think all festive books should have.