The Christmas Party by Carole Matthews 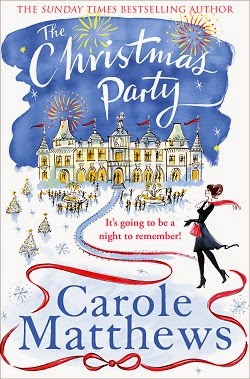 Single mum Louise has been struggling since her partner left her and their daughter, Mia. But now she's landed herself a good job that can kick-start her career again. She hasn't been working for Fossil Oil for very long but she feels she can really grow within the company and provide a good life for Mia. The only problem is her boss, Tyler, who can't seem to keep his hands to himself.
Corporate wife Kirsten is fed up with her life and her marriage to Tyler. She knows all about his affairs but hopes that they can have a good Christmas together and re-ignite their relationship.
And then there is Melissa, the glamorous wife of Tyler's boss, Lance. Together, they have made Fossil Oil a success but it seems now that Lance is getting older, he's being side lined onto a new project, which means moving away to Washington.
With Christmas around the corner, Fossil Oil is putting on an elaborate Christmas party for its staff. It will be a night to remember - but not necessarily for positive reasons.
The Christmas Party mostly takes part over one day as Louise, Kirsten and Melissa prepare for and then attend Fossil Oil's Christmas party. The party takes place at a huge, luxurious manor house that is decked out for the occasion and sounded amazing. I would have loved to have attended the party myself - but without all the drama that ensues! While Kirsten and Melissa have lived a privileged life with their successful husbands, Louise has been struggling as a single mum. She's been left in debt by her ex partner and is now living back with her mum and dad. I felt for Louise as she has been trying to make a better life for herself and her daughter and thinks she's found that first step on the ladder that she needs but Tyler is making things difficult. Tyler is quite a slimy character and very selfish, so I felt sorry for his wife, Kirsten too, although I wanted to give her a shake at times as she sat back and allowed Tyler to make a fool out of her and their marriage.
Although the book takes place over one evening for the most part, an awful lot happens at the party and we get to know the characters quite in depth. Because of the structure of the book, it felt like the first chunk was quite slow whereas the ending, taking place over Christmas Eve and Christmas Day, were rushed and I would have liked to have more of an idea where Louise, Kirsten and Melissa's lives would take them once the book ended.
The Christmas Party is a fun, festive read full of drama and scandal. There isn't a dull moment as we witness the party - and the fallout afterwards! ﻿