22-year-old Kelly works with Ally at Westerly’s, a coach tour company. If they were characters in a comic book, Kelly would be Ally’s arch-enemy. Kelly has everything Ally wants; fun, freedom and youth. Kelly is free to have fun without the deafening ticking of her biological clock getting in the way and doesn’t take life too seriously. She has an active social life, which she amuses their colleagues with on a regular basis.

Ally’s colleague strode into the room wearing a tiny black skirt and a silky red blouse. Ally counted the buttons that were actually fastened – three – before averting her gaze. Of all the things Ally didn’t want to see that morning, Kelly’s black lacy bra was in the top three.

HR manager Jason is Ally and Kelly’s boss – and he’s pretty hot too. Ally has a silly work crush on Jason and while she knows nothing will ever happen between them, it doesn’t hurt to admire the view every now and then. Jason is a bit of a ladies man and is currently enjoying a casual fling with Kelly, a fact that incenses Ally. Kelly really does have everything going for her.

Jason had crossed the office and was holding Kelly’s hand in his, stroking a finger along the bandage. Ally would sprain her wrist too if it meant Jason would hold her hand with such tenderness, but then Ally wasn’t enjoying a supposedly secret fling with the gorgeous Jason.

But appearances can be deceptive. When Ally’s birthday wish is granted and she infiltrates their world, she soon sees a different side to her colleagues... 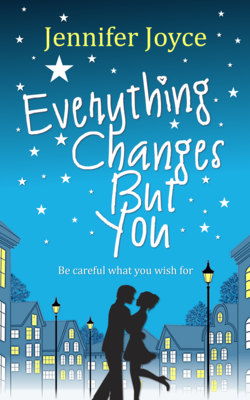 Email ThisBlogThis!Share to TwitterShare to FacebookShare to Pinterest
Labels: ECBY Meet The Characters, ECBY: Book Extras, Everything Changes But You