Before I Go To Sleep by S J Watson 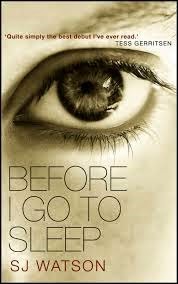 Every morning, Christine Lucas wakes up not knowing a thing about her past. She doesn't remember the husband lying next to her, the house they are living in or what caused her to lose her memory. Every morning, her husband, Ben explains, knowing Christine will have forgotten again by the following day.
But then Christine starts to see Dr Nash, and the pair slowly start to make progress with Christine's memory, piecing together fragments of her past.
Before I Go To Sleep has been waiting on my kindle for a long time but, as the film will be released soon, I thought it was about time I read it. I've heard lots of great things about the book, so I wasn't surprised when I was immediately hooked, drawn into Christine's bewildering world of lost memories. I was so desperate to find out what had happened to Christine that I read the whole thing in a day!
I immediately felt for Christine as she tries to adjust day after day. She doesn't remember anyone - friends, family or even her husband, Ben, which must be so frightening and frustrating. I wasn't sure how Christine's story would be told - would we see her waking up each day and having to learn everything from scratch, which would have been quite repetitive? - but I thought it was quite clever how the story was put across in a more fast-paced way. Almost right from the beginning, we know something isn't quite right, so I was keen to keep reading to see how the story would unfold and what memories Christine had lurking at the surface.
I thought the book was a fantastic read, with plenty of twists and intrigue to keep you guessing and turning the pages. And now I can't wait for the film!﻿