Save The Date! by Allie Spencer 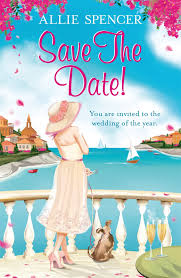 When Ailsa receives an invitation to her cousin's wedding, she isn't sure she wants to go. Even if it would mean an all expenses paid trip to Tuscany for a week. Ailsa's family are all a bit bonkers and there is the added trouble of the ten year rift between Ailsa's mum and her auntie Sheila, the mother of the bride.
But bride to be Jess convinces Ailsa to go to the wedding and so she flies over to Italy. While there, the last person Ailsa expects to run into is Nick, the man she split up with three months earlier and is still trying to get over so she is shocked to see him checking into the hotel.
Bickering with Nick is not the way Ailsa thought she would spend her luxurious week away. Nor did she expect to adopt a stray dog or become a referee between the bride and groom.
Save The Date! is a fun, summer read taking place in a beautiful setting that made me want to pack my suitcase and jet off to Tuscany. Jess starts off as a bit of a spoilt princess with an expensive, over the top wedding but we soon get to know her more and she really grew on me and I ended up thinking she was quite sweet, if a little ditzy at times.
There are loads of amusing moments in the book, most of which come courtesy of Arthur, a little stray dog who takes a shine to Ailsa. For me, Arthur completely stole the show. I thought he was an adorable character packed with personality.
As a main character, I really liked Ailsa. She came across as warm and witty and while she finds herself in the centre of many dramas throughout the book, I felt the drama wound itself around her rather than Ailsa actively seeking it out, which I liked.
Thank you to Arrow for sending me a copy to review.﻿