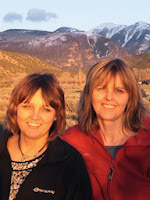 Not a sound is heard as it lands silently on the mat. No drums rolls, crashing thunder, shafts of light. The walls don’t start crumbling, the ground doesn’t vibrate with terrifying tremors and a yawning fissure fails to zigzag across the kitchen floor and separate my husband from his breakfast marmalade.

In short, I’ve no clue as to the impact it’ll have on our lives. Mayhem. Marital breakdown. Murder. It should at least have been written in blood or come in the beak of a dark-winged raven.

It is a postcard. “Love from London” blazoned above a giant pair of pouting lips kissing a cherry-red heart...

Dearest, sweetest Declan – it begins. My eyes widen as I take in the blue spidery handwriting and race to the signature. ‘Love from La La.’

From Looking For La La by Ellie Campbell


There I was this morning with a pair of slinky little knickers in hand. I’d just found them curled up inside my husband’s jogging bottoms (track suit pants for our American readers), almost as if some sultry mistress had placed them there to be found by my prying eyes. I knew they weren’t mine. I know my knickers (panties) – intimately. As most women do. I know they’re not my daughter’s. Even though she’s coming out of her teens, she still can’t seem to work out how to rotate that switch on the washing machine. Nor find it for that matter.

My son ambled past, yawning and stretching. “Here,” I chucked the knickers at him. “Do these belong to your girlfriend?”

“Maybe,” he looked them over, skimpy, lacy at the top, silky at the front, then left the room and came back moments later.

“Is she there?” I asked, surprised. If so, she’d been very quiet all morning.

“No. But I took a photo of them with my phone. And she said they’re not hers.”

So should I confront my husband? After all they came out of his trouser legs.

Well, if I was a jealous woman I possibly would. Then again, if I’d been a jealous woman a few years back when “the postcard” dropped through the door, professing undying love for my husband, Lorraine and I might not be here, talking about our third Ellie Campbell novel, Looking For La La.

Just as in the novel, the postcard was from a woman, who called herself La La, addressed to my beloved spouse. Maybe fleetingly, a doubtful thought might have crossed my mind, and yes, I could have smacked him over the head with the toaster and demanded to know who she was, why she had written to him….barraged him with questions, accusations, burst into floods of tears.

Sad truth is, I’m used to it. It’s been a constant throughout our courtship, years of living together, and now our married life. As an athletic, good-looking, young (and, even now, not so young) man working in the leisure industry, my hubbie is constantly in the company of shapely young women with abs like the Baywatch babes. Teaching aerobic classes, acting as fitness instructor and personal trainer, he has been surrounded half his working life by semi-clothed health-conscious predatory females. Comes with the territory.

So like Cathy’s husband, Declan, in Looking for La La (who all Cathy’s friends drool over), ‘Him indoors’ has had a lot of attention from admirers over the years, to the point of acute embarrassment. I was once in one of his circuit training classes when the girl star-jumping next to me hissed, “Teacher’s a bit hot, isn’t he?” What could I reply? “Actually that’s my husband” or like I did at the time, mumble, “Not really my type”.

Another time he had a horrifying stalker, who having failed to seduce him, (he managed to push her out of the health club door late one night, locking it quick) ran up three flights of stairs, along a corridor, down another flight, to sneak back in through a fire exit, scaring him rigid. I had to make him a stiff drink when he arrived home.

In fact it’s almost surprising there weren’t a few more La La’s over the years, maybe not all sending him postcards but...you get my drift.

It’s hard enough keeping up with a husband who is two, (he says three) years younger than myself, who runs marathons like most people were going for a Sunday stroll. And, unlike me, relishes organising and taking part in various sporting challenges.

This Sunday he’s running his 10th marathon – having already done the biggies, such as Edinburgh, Brighton, London, Paris, Dublin. In a few months’ time he’s cycling from Redhill, Surrey to Paris, France – 175 miles in 24 hours. Shortly after that it’s the Three Peaks – three of the highest mountains in Wales, Scotland and England, all to be climbed again in 24 hours. 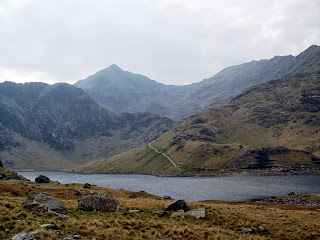 
Then it’s the North Downs Trek, the South Downs Trek, South Downs Way - 100 miles in a day off-road mountain bike challenge. Last year of his own free will (durr), he jumped out of an aeroplane, walked on burning coals, took part in a cycling road race, a gruelling walk through the boggy Yorkshire moors, bungee jumped off a bridge with a dodgy rope in South America. You get the picture. All for charity, of course, but still… 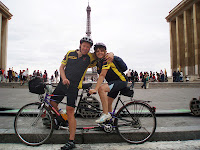 He’s on a high protein, no alcohol diet right now (for the marathon), while I’m on an eat as much as I can and drink till I drop phase. Well it is still winter, so I need a few layers around my middle. Can I keep up? Could I in any way be described as toned or in shape? No is the brutal answer. I walk the dog, play a bit of badminton, tend my allotment, do the odd bit of gardening, and am practically forced every year to join him on the tandem – he must still love me then? – to cycle long distance challenges…to Paris, Gibraltar, Montpellier, and this year 300 miles (in 3 days) to Copenhagen. I guess I must love him too.

Because frankly I’m basically lazy. If I could get away with it, I’d lie under my duvet every morning, tapping away on my computer writing the next “Ellie Campbell” novel. Exercising only my fingers and thoughts.

More importantly, should I be worried about the stray knickers at present lying neatly folded on his neatly folded jogging bottoms? No, I’m sure there must be a perfectly innocent explanation. Maybe he wanted to try them out himself before he bought a similar pair for me?

And what did I do when the postcards came through the door? Well, do writers ever waste anything? Being a trusting soul, (and an author) instead of leaping up to attack him, I leapt out of my chair, raced up the stairs to the attic, jumped onto my computer and furiously began typing the first few chapters of what was to become Looking for La La, roping in my sister and co-writer, Lorraine. We enjoyed ourselves hugely as we took what was likely a mean little prank and turned it into a funny mystery novel about a scatty housewife who stirs up a whole lot of trouble by turning sleuth.

They say jealousy is a wasted emotion. Lorraine and I believe it’s far more than that – it’s a wasted novel.

And the underwear? Turned out to belong to my daughter after all.

In a recent survey 65% of mothers admitted feeling undervalued, over-criticised and constantly tired.

Cathy is no exception. Her dull, uneventful days as a stay at home, mother of two, are radically transformed however with the arrival of a heavily lipsticked postcard addressed to husband, Declan. Who is the mysterious La La? Could Declan really be having an affair? And is Cathy actually being stalked?

Whatever – it will definitely prove riveting gossip for the Tuesday Twice Monthlies, Cathy’s 'Mothers Restaurant Research’ group where scandal flows as recklessly as the wine. But what starts as a light-hearted investigation with best friend Raz, soon turns into something much more sinister.

With a possible murderer on the scene, a sexy admirer igniting long-forgotten sparks, and all her friends hiding secrets, it’s not only Cathy’s marriage that’s in jeopardy. Add in the scheming antics of Declan’s new assistant, the stress of organising the school Save The Toilet’s dance and the stage is set for a dangerous showdown and some very unsettling, possibly deadly, revelations.

Ellie Campbell is a pseudonym for sisters, Pam Burks and Lorraine Campbell.  Transplanted from Scotland to England as teens, they took up writing between full-time work, world travelling and child-raising.  Each of them had over 70 short stories published in major UK and international magazines before they decided to collaborate in writing a novel based on their experiences as the youngest of four sisters, despite the fact that they now lived on separate sides of the Atlantic.  How to Survive Your Sisters, published by Arrow Books, was quickly followed by a second ‘Ellie Campbell’ novel, When Good Friends Go Bad and now a third, Looking for La La. 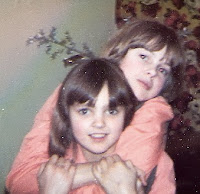 Pam lives in Surrey with her husband and three children while Lorraine has settled on a ranch in Colorado with her husband, three horses, dog and multiple barn cats.  They still talk on the phone almost daily and regularly send ideas, chapters, and novel drafts to each other over the internet.


Their current Giveaway can be found here


Looking For La La is available from Amazon here

You can find out more about the book and its authors at their blog, Facebook or follow them on twitter: @ecampbellbooks
Posted by Jennifer Joyce at 08:00