This Is How It Ends Blog Tour

I'm pleased to welcome Kathleen MacMahon onto the blog today to talk about the inspiration behind her debut novel, This Is How It Ends. 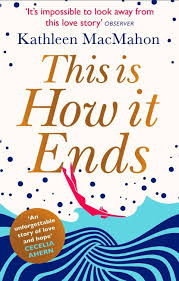 It started with the beach. A long, wide stretch of city beach, five minutes walk from my house. Every morning, I would walk the dog there. After I’d made the school lunches and cooked the breakfast and emptied the washing machine and the dishwasher, before I had showered and stepped into my suit and my high heels and slipped into the busy machinery of the newsroom where I worked. An hour stolen from the day, just me and the dog and the wide empty beach. The slow sweep of the tide and the swirl of the world all around us.

It was the Autumn of 2008 and in the United States, a black man was running for President. On Wall Street, venerable banks were tumbling to the ground, numbers disappearing off trader’s screens. There was a sense of history speeding up, of the unthinkable happening, both good and bad. It was that sense of the outside world spinning faster on its axis that made me look inwards. I watched the dog, tumbling after a tennis ball in the shallows. The Canada Geese, huddled on the football pitch, like refugees. I listened to Bruce Springsteen on my iPod and felt for that moment, joy, pure and free.

That was the starting point for the book. I had an image of a woman, sadder than she deserves to be, walking the beach with her dog. I had a sense of this terrible battle she was fighting, to find an anchor for herself in the world. It occurred to me that the book would have to be a love story. I would walk a good man into her life, a man who would change her view of the world and bring with him the joy that had until now eluded her. I decided to make him an American because that would bring a different energy into the story, and a different outlook on life.

Writing a book is a bit like trying to catch scraps of paper in a high wind. You have all of these ideas swirling around your head and you’re trying to grab them and pin them down on to the page. The book that emerges at the end is an imperfect collection of all of those ideas. There are always scraps that got away.

I wrote a lot of swimming into this book. The swimming is a great joy for me and I wanted to pour it onto the page. It became part of the story, just as Bruce Springsteen did, and the little bedraggled dog and the seabirds and the strand. Those things were all part of the inspiration behind the book, but they turned out to be more than that. They worked themselves into the fabric of the story, bending and shaping the plot.

Bits of my childhood made their way into this book, and bits of other people’s childhoods too. The widowed father who tries to reproduce the meals that his children have eaten in other children’s houses. The oldest daughter, thrown into the role of housewife when her mother gets sick. The old Super 8 footage of the dead mother, seen for the first time decades later. As I was writing the book these things darted out of crevices in my memory, like small fish darting out from behind a rock. It always surprises me, the things you’d thought you’d forgotten. They’re not gone, they’re just lurking there, waiting for an opportunity to come out.

What I’ve discovered is that a writer is a bit like a parsimonious cook. Nothing is ever allowed to go to waste. Every sound, every sight, every scrap of memory, they’re all stored up in some cavernous larder for future use. Every emotion you’ve ever experienced, every emotion you’ve observed in other people, they get boiled down to make a stock. And sooner or later, it all goes into the pot.

Kathleen MacMahon is a former radio and television journalist with Ireland’s national broadcaster, RTE. The grand-daughter of the distinguished short story writer Mary Lavin, Kathleen lives in Dublin with her husband and twin daughters. The hardback edition of This is How it Ends, her first novel, was a No.1 bestseller in Ireland for five consecutive weeks and spent nine weeks in the Top Ten bestseller list.
Posted by Jennifer Joyce at 08:00