The Accidental Husband by Jane Green 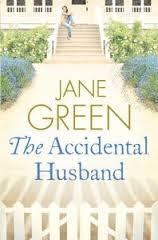 Sylvie never thought she'd fall in love again after the death of her husband, leaving her to raise their young daughter on her own. But then she meets Mark who offers Sylvie love, passion and security as well as being a wonderful father to Eve. Sylvie and Mark don't have a conventional marriage, with Mark working away from home for large chunks of time but the marriage has worked for them until now. Until recently, Sylvie had been happy for Mark to work away, leaving her and Eve to spend time together but she's started to want him around more.
Maggie has what she always wanted; handsome, successful husband, happy children and a beautiful home to be proud of. Maggie enjoys her luxurious lifestyle, hosting lunches and jetting off on holidays but her lavish lifestyle is about to come crashing down around her.
Sylvie and Maggie don't seem to have anything in common but they are about to be bound together by a shocking secret.
It's been a long time since I've read a new Jane Green book but I'm glad I read this one as I thought it was a fantastic read that had me hooked. I didn't want to put the book down, especially at the beginning as I awaited the big reveal of the secret. It's quite clear what the secret is going to be but I was looking forward to seeing it unfold and the fallout that would ensue. My only criticism of the book would actually be at the beginning too because we only get to know Sylvie, Mark and Eve in the first part (approximately 150 pages). I can see why it was written this way as the first part is building towards the big reveal but, as it was obvious what the secret is, I didn't think it was necessary to keep Maggie held back for so long. Because of this, it took me a while to feel connected to Maggie whereas I felt the connection to Sylvie straight away.
I liked how the fallout was handled, with everybody coping in their own ways and while there wasn't anywhere near a fairytale ending, it was believable and, in some cases, heart wrenching.
The Accidental Husband is full of family drama, friendship and heartache. The women in the book are all different but are strong in their own ways and I loved it.
Thank you to Penguin for sending me a copy to review.﻿