A Fascinating Journey to Tibet by Sophie Schiller

Most people remember Brad Pitt as Heinrich Harrer, the Austrian climber who scaled the Himalayas to reach the Forbidden City of Lhasa, but he was not the first Westerner to enter Tibet. Many intrepid men and women attempted to enter the Forbidden Kingdom in the decades before Harrer, but very few accomplished this seemingly impossible task, but some fortunate ones did…

Race to Tibet is the story of Gabriel Bonvalot and Prince Henri d'Orléans, two unlikely partners who team up despite their opposing natures to be the first Westerners in the modern era to reach Lhasa. Together with a team of trusty caravaneers, the explorers tackle impossible odds, including high altitudes, mountain sickness, bitter cold, fierce winds, bandits, devious Chinese Ambans, and an alluring Tibetan Buddhist Princess with a deadly secret. Pushed to their limits, the intrepid explorers must decide what price they are willing to pay to reach the elusive Forbidden City. In some cases, the price was simply too high.

The novel is set in 1889, during the golden age of exploration, at the height of Europe's fascination with the Forbidden Kingdom at the Roof of the World. During the late Victorian era, no living European had visited Lhasa or seen the Dalai Lama. Lying at an altitude of 11,000 feet and shielded by the impenetrable walls of the Himalayas, reaching Lhasa was the goal of every explorer worth his salt. Before long, an informal "Race to Tibet" began, with only the bravest and hardiest of travelers attempting to penetrate this mysterious land of snows.


The novel touches on such themes as pride, ambition, self-sacrifice, and courage. Explorers were willing to risk everything, including their lives, to achieve their goals. Many never made it back home. The novel also explores the tenuous position of Tibet in Central Asia as it struggled to maintain its freedom and independence from China, Russia, and Great Britain. The god-like positions of the Dalai Lama and the Panchen Lama have been threatened by the Chinese Empire for centuries. By studying history, we can more fully appreciate the delicate position of Tibet in the world today. In many ways, the mystery of Tibet deepens with each passing year. 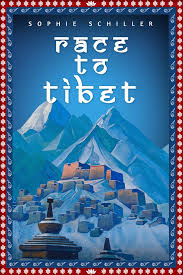 Sophie Schiller is a writer of historical novels. She was born in Paterson, NJ and grew up in the West Indies amid aging pirates and retired German spies. Among other oddities her family tree contains a Nobel prize-winning physicist and a French pop star. She loves stories that carry the reader back in time to exotic and far-flung locations. She was educated at American University, Washington, DC and lives in Brooklyn, NY. She is currently at work on a new historical thriller set in the Caribbean.


If you would like to appear here on the blog via a guest post, email me at jenniferjoycewrites@gmail.com
More details here
Posted by Jennifer Joyce at 08:00