The Liar by Nora Roberts 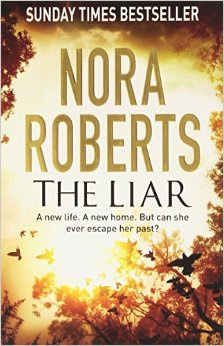 Shelby thought she knew Richard, the man she married and father of her child. But when Richard is killed in a boating accident, a grieving Shelby learns the devastating truth about the astronomical debt her husband has left her in. She’ll lose the house, but even that won’t be enough to pay off the credit cards and lawyer’s fees.

Packing up and selling off what she can, Shelby decides to move back home to the family she has rarely seen since she ran off to marry Richard. While sorting through Richard’s belongings, she finds a key to a safety deposit box. The contents of the box start to unravel the lies Richard has told during their marriage and Shelby realises she never really knew her husband at all.

I was looking forward to reading The Liar as I liked the sound of the mysterious plot surrounding Richard. The book got off to a great start with the discovery of the safety deposit key and I imagined there was going to be a fast-paced, intriguing story ahead. But the pace soon slowed down as Shelby went through the motions of selling up the house and its contents and moved back home to Rendezvous Ridge. Once she arrives in her former town, Richard and the mystery surrounding him takes a backseat as Shelby is reacquainted with old friends and enemies and catches up on the gossip of who is now married, divorced or still single. I really started to switch off until the Richard story was picked up again and there was much more action, particularly towards the end of the book.

The Liar wasn’t quite what I was expecting. There were flashes of a great story within the book, but there were far too many unnecessary distractions from the plot to keep me really interested. The whole book seemed really drawn out, which was a shame. Having said that, I did quite enjoy the ending. Although I’d guessed what would happen quite early on, it was full of action and really recaptured my interest.
Posted by Jennifer Joyce at 08:00