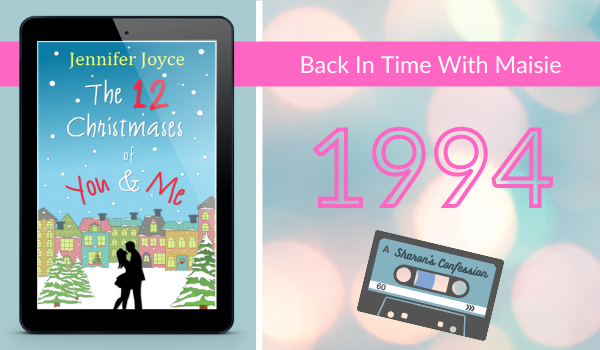 First up is 1994, when Wet Wet Wet was number one in the charts for a million weeks (15) with 'Love is All Around', The Lion King was topping the film charts, and Grant Mitchel was about to drop a bombshell in The Vic...

Love Is All Around (Wet Wet Wet)

Without You (Mariah Carey)

Crazy For You (Let Loose)

Things Can Only Get Better (D:Ream)

Chaka Demus & Pliers have the first number one single of the year with 'Twist & Shout'
The New Adventures of Superman, starring Dean Cain and Teri Hatcher, airs on the BBC in January
The first lesbian kiss before the UK's watershed is shown on Channel 4's Brookside
One Direction's Harry Styles is born on 1st February
Eastenders increases its episodes from two per week to three
Channel 4 broadcasts Frasier for the first time

The Channel Tunnel officially opens on 6th May
Lidl opens its first stores in Britain
The 1,000th episode of Eastenders and the 2,000th episode of Neighbours are aired on the BBC, while The Simpsons reaches its 100th episode on Sky1
The X-Files is aired on BBC Two for the first time
Oasis release their debut album, Definitely Maybe
Sharongate - in Eastenders, the tape recording of Sharon confessing her affair with her brother-in-law, Phil Mitchel is played in front of everybody in The Vic by husband, Grant

The first episode of The Vicar of Dibley airs on 10th November
The National Lottery is born in the UK, with its first draw on 19th November. The show is hosted by Noel Edmonds
The last ever edition of The Generation Game hosted by Bruce Forsyth is aired on Christmas Eve
Boyzone appear in the charts for the first time with 'Love Me For a Reason', reaching number 2
Police Camera Action! airs for the first time
Pets Win Prizes, Animal Hospital, SMart, Harry Enfield and Chums, Room 101, The Fast Show, Ready Steady Cook, Mind the Baby, Mr Bean, and Don't Forget Your Toothbrush also have their British TV debut.